Spring is climbing season on the Himalaya. In the last century climbing the highest mountain chain of the world was a task reserved to the most expert and the bravest climbers. But in recent times it has turned to an adventure trip for “high-altitude tourists”, people ready to pay up to 100,000 dollars to join an expedition. The highest price of this recent revolution is the life of tens of porters, the “Sherpa” people, whose support is vital to achieving the mountain tops. Their role includes preparing the way along which expeditions will proceed, fixing security ropes, installing the camp, carrying food and equipment (like the heavy oxygen tanks which would avoid their rich customers the risk of cerebral or pulmonary edema). To accomplish these tasks they have to go up and down along the most dangerous sections of the climbing way. A job which has the highest mortality rate (1.2%) for workers: in example, the percentage of porters who died climbing the Everest since 2004 up today is 12 times higher than death rate among soldiers fighting in Iraq war between 2003 and 2007.

This long string of tragic events has thrown limelight upon Sherpa as only did Tenzin Norgay, the porter who in 1953 guided Edmund Hillary up to Mount Everest’s top for the very first time. Prior to the development of this new high-altitude tourism business, Sherpa people had never showed interest in reaching mountain tops. In their native language there’s not even a word for “mountain top”. Every single mountain is named after the godhead which is said to inhabit it. Mount Everest is named Sagarmatha, “the abode of Mother Earth”. Sherpa is the name of East Nepal people which is commonly used to refer to all the porters operating on Himalaya even below 5,000 meters level. A job prevalent in a Country which does not offer many opportunities even to educated people. Men, women and children paid according to the weight they are ready to carry. Often more than that even a mule would reject. 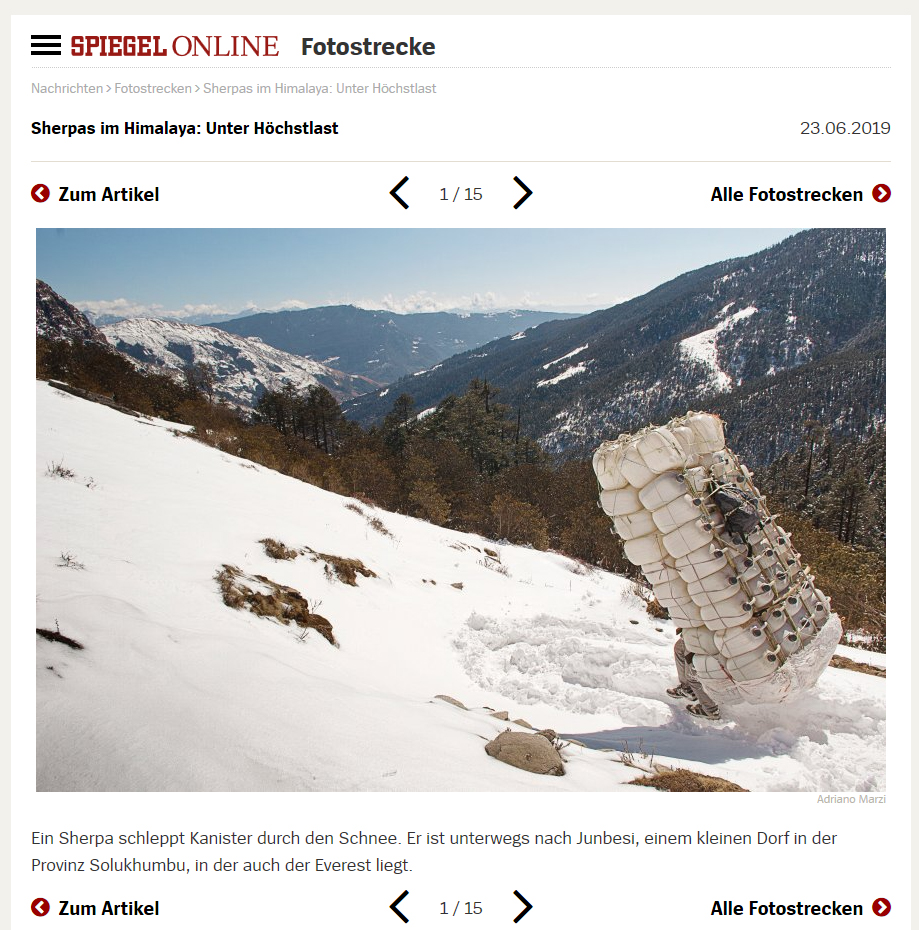 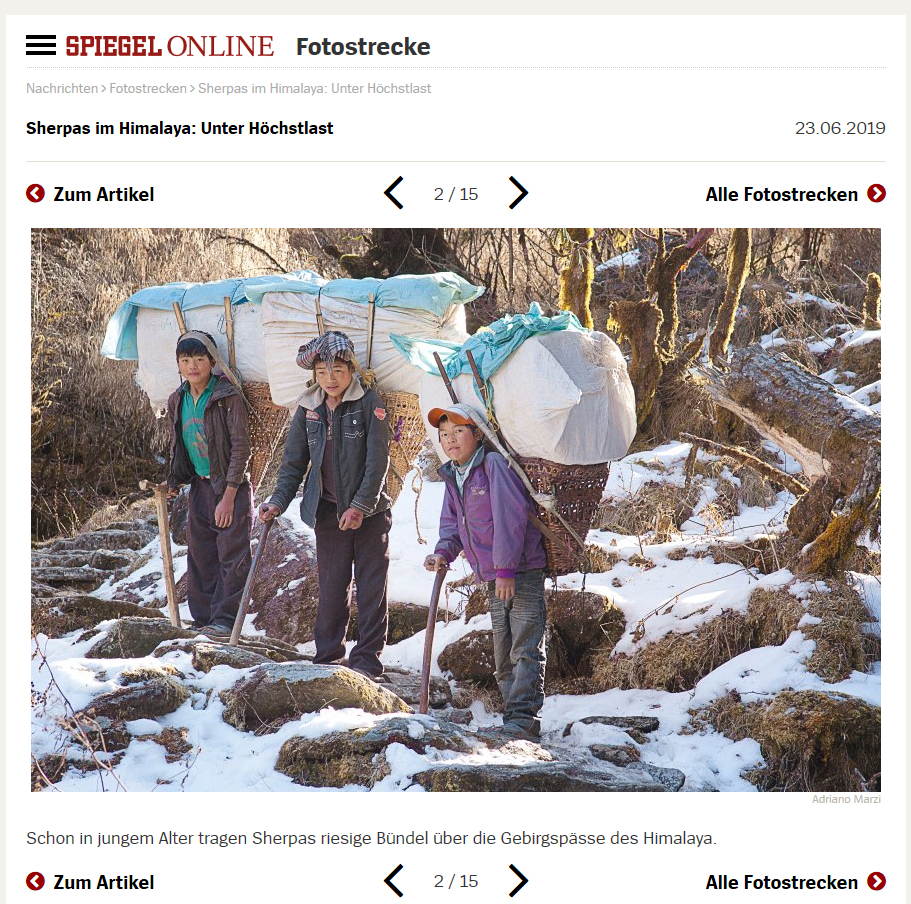 Young Sherpas heading out on the last rise to Salpa La, the Himalaya pass parting the Sankhuwasabha region – an area not yet reached by tourism, inhabited mainly by Rai people of Hindu religion – and the Solukhumbu region, favorite destination of trekkers arriving in Nepal 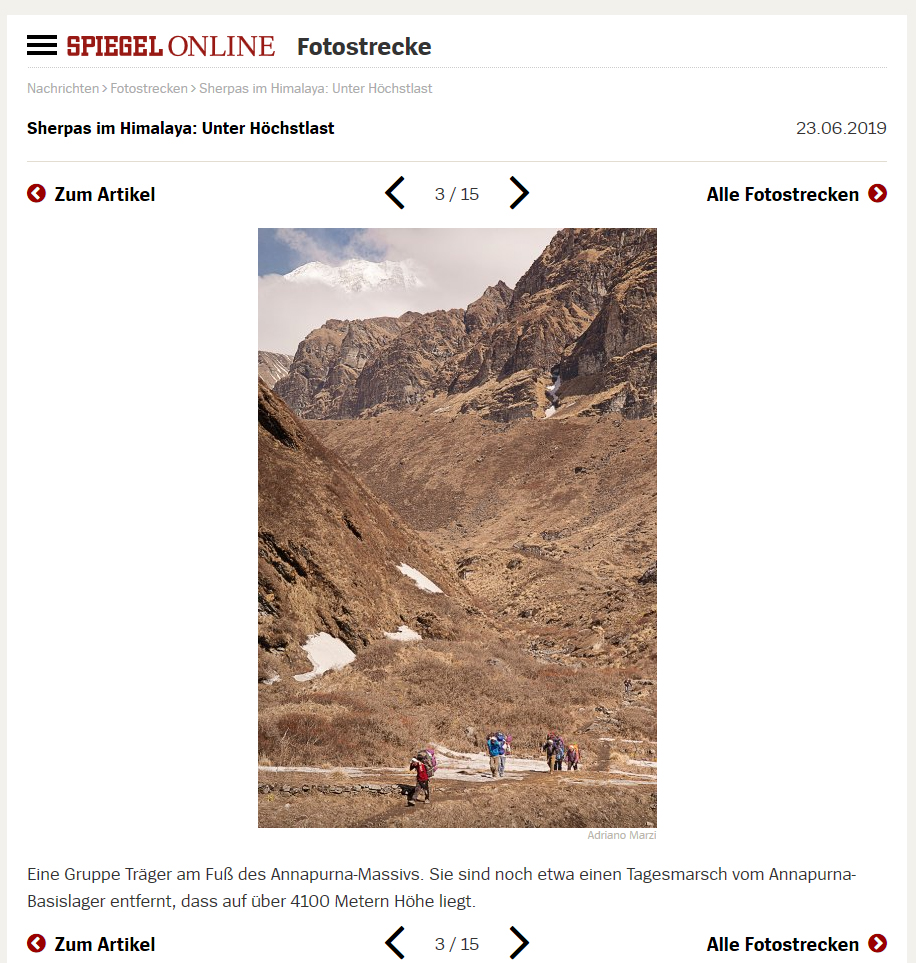 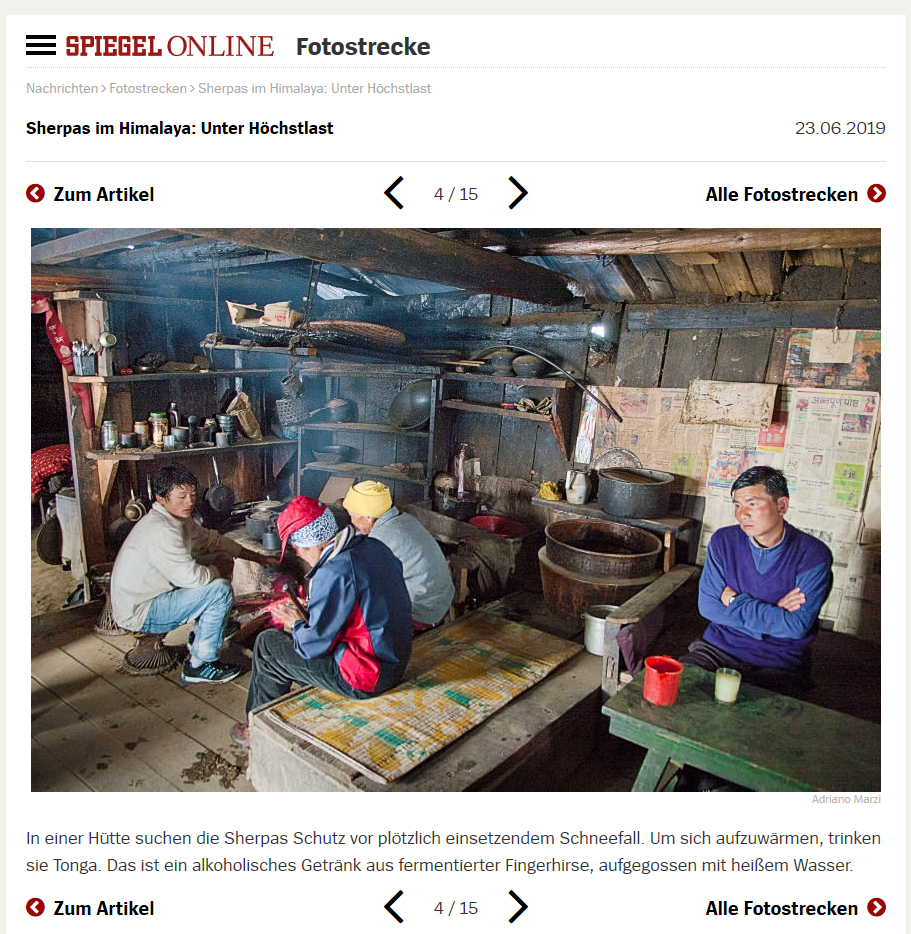 A group of sherpas bound to Traksindo La – an Himalaya pass along the Everest Base Camp trek – seeking shelter from a sudden snowfall. They warm up by drinking tongba, a beverage made of hot water and fermented millet generally served in a bamboo cylinder provided with a staw 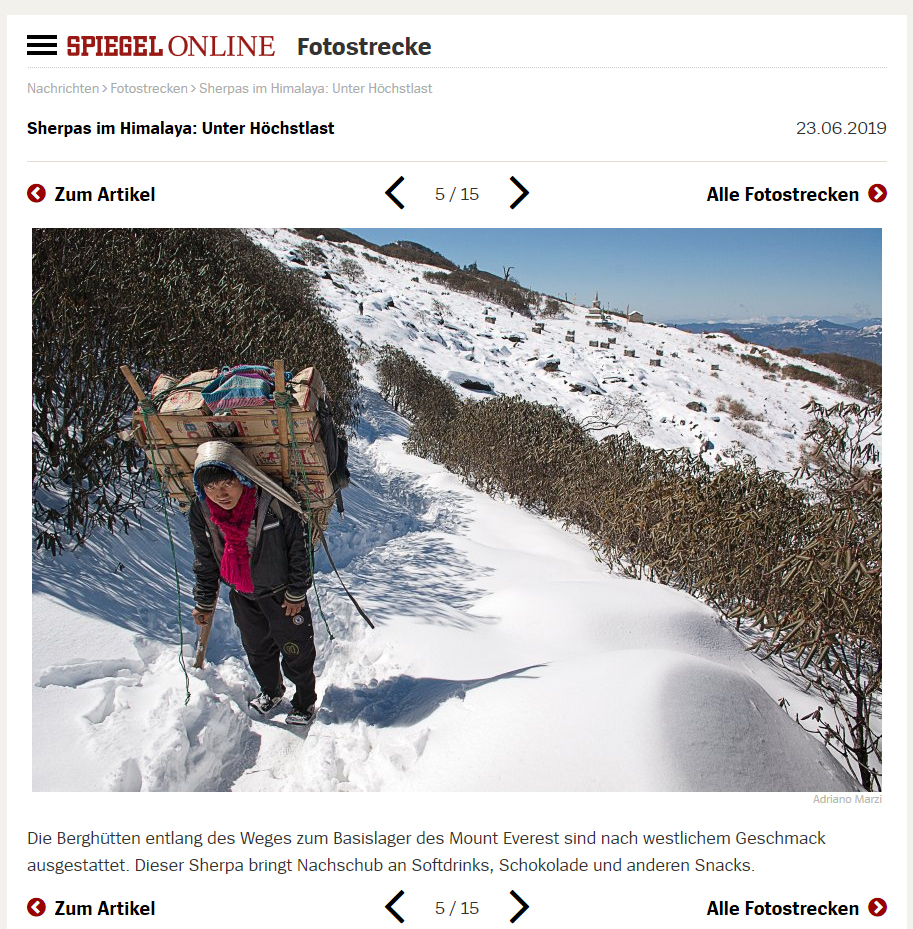 A young sherpa on the way to Lamajura La, the Himalaya pass to Solukhumbu region. Along the Everest Base Camp trek tourist facilities are supplied according to western tastes. Packing cases full of soft beverages, chocolates and any sort of snacks emerge from the doko placed on porters’ shoulders, fastened to their forehead by a long band 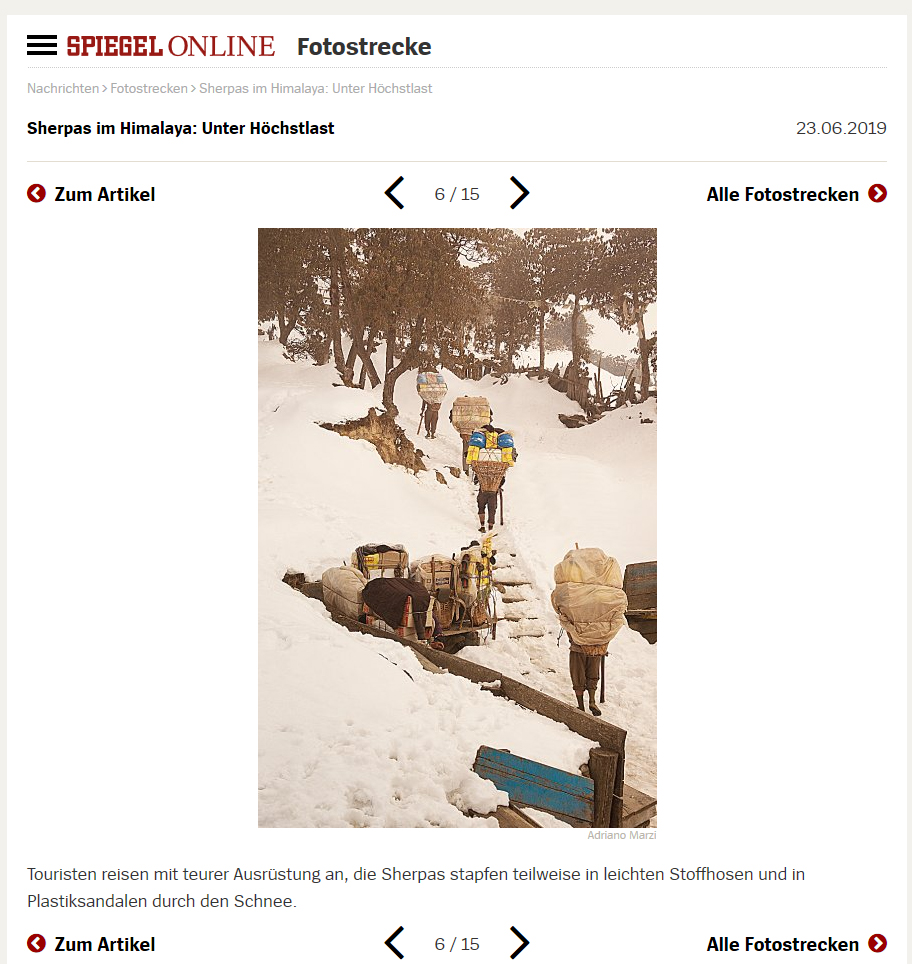 A group of porters arriving from Bandhar village heading out on the last climb stretch to Lamajura La, the Himalaya pass doorway to the Solukhumbu region, where Mount Everest rises. Some of them wear plastic sandals even if they have to make headway under the snow and on a partially frosty path 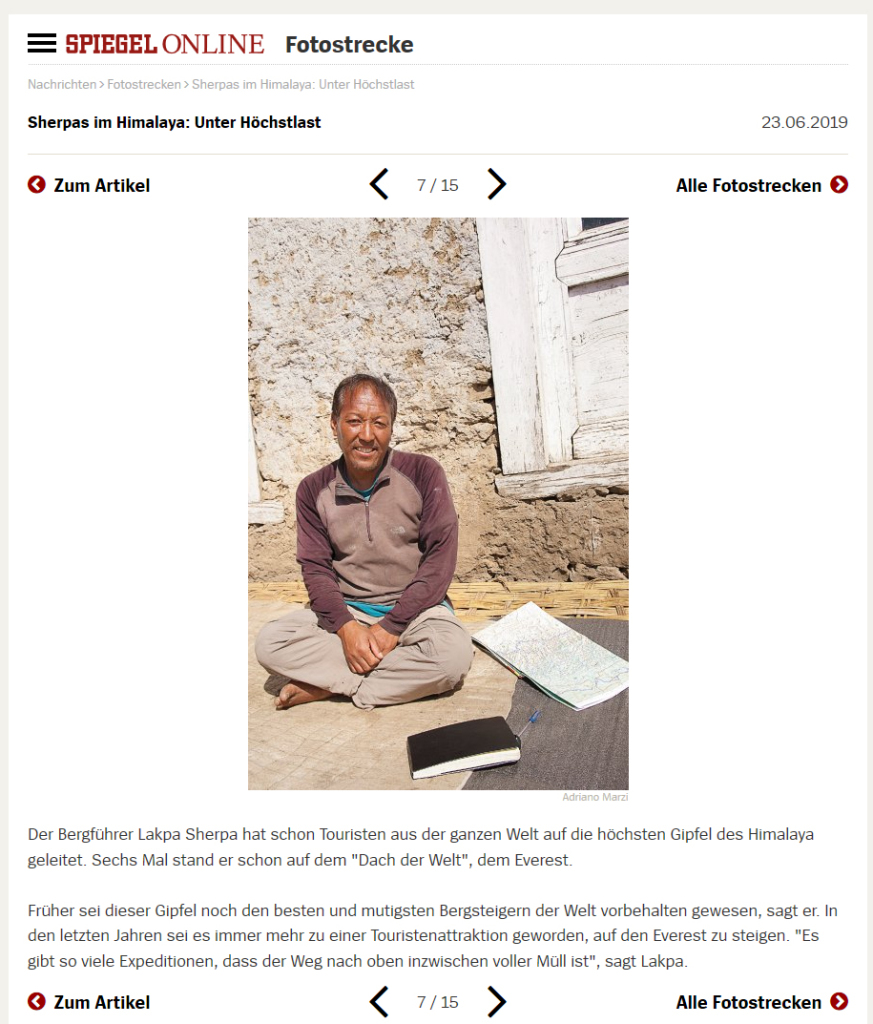 Lakpa Sherpa – a famous Nepali mountain-guide who climbed Mount Everest six times and guided climbers from all the world on the top of some of the highest Himalaya peaks – in Sanam, his native village. “In the XXth century – he tells me – reaching the Everest peak was a challenge reserved to the most expert and brave climbers. In recent years it has turned to an adventure for heights tourists ready to pay as much as 100,000 dollars to be part of an expedition. Today the Base Camp is a place crowded 9 months a year, equipped with all modern comforts including wifi connection. Expeditions bound to the mountain top are so numerous that tonsof garbage are to be found on the way” 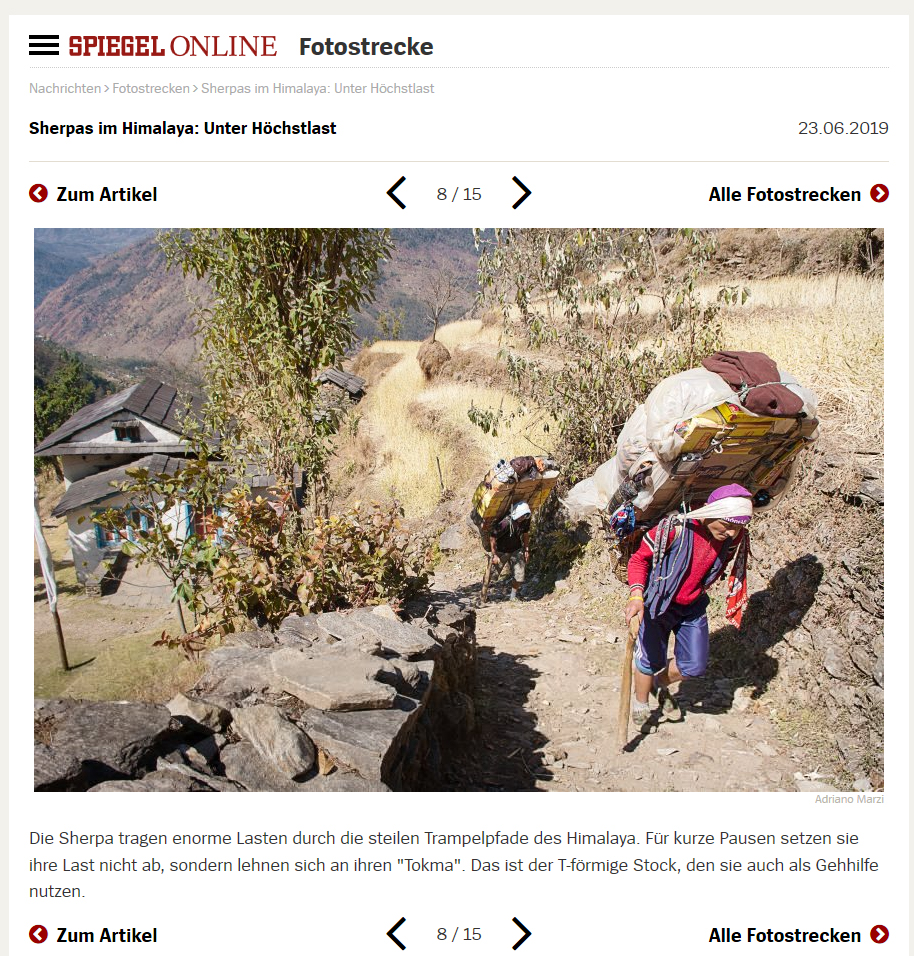 A group of sherpas working along the Everest Base Camp trek. The typical Nepali curved blade knife, the  khukuri, is fastened by the side of the load. When porters need make a halt they lean against their tokma, a squat T-shaped stick that they use as well  in the steepest climbs 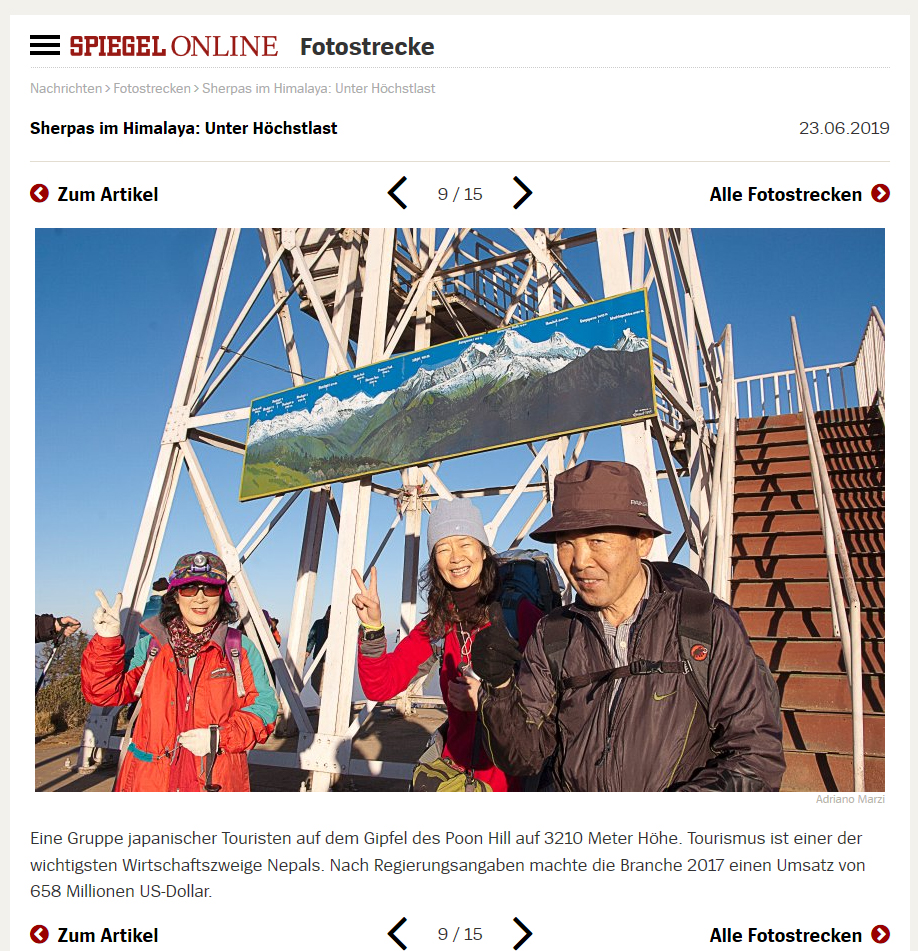 A group of Japanese tourists at Poon Hill along the Annapurna Sanctuary trek. Tourism is the main contributor in Nepal economy: in 2017 it was worth 658 million dollars 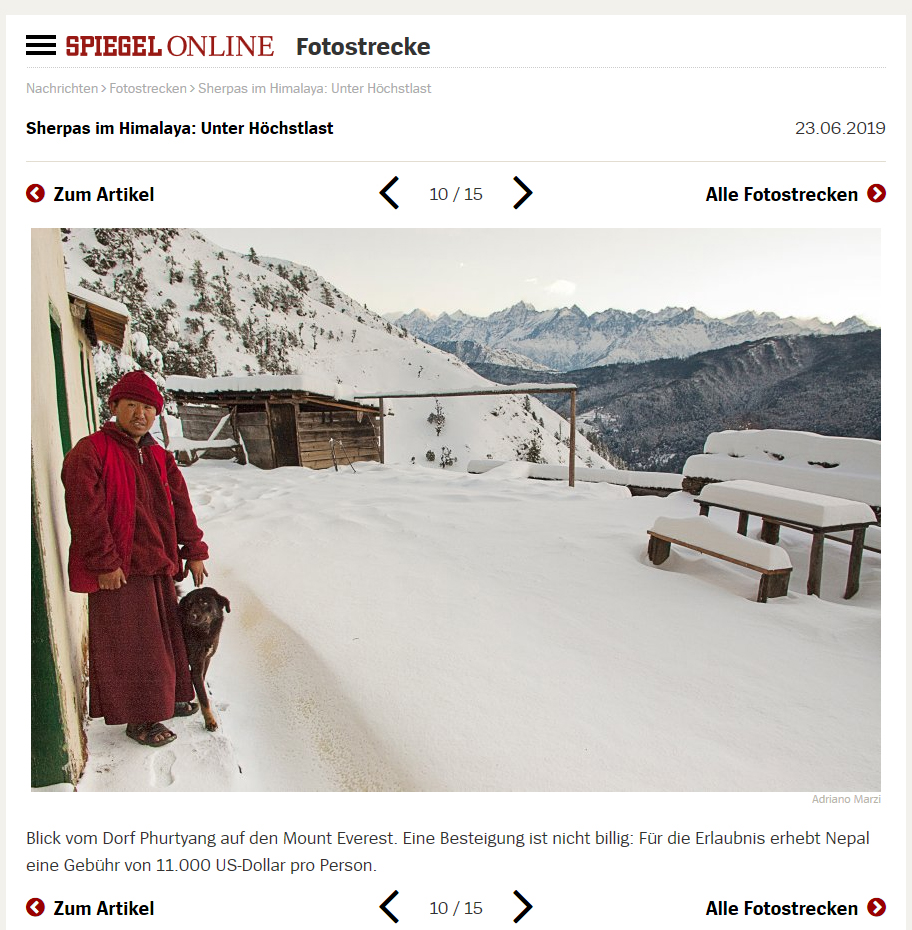 Phurtyang village after a snowfall. Everest is the third peak from the left. Nepal government, which cashes in 11,000 US dollars from every tourist wishing to rise the mountain, in 2019 granted a record number of 381 expedition permits. The most part went to inexperienced people, thus increasing the risks of deadly incidents 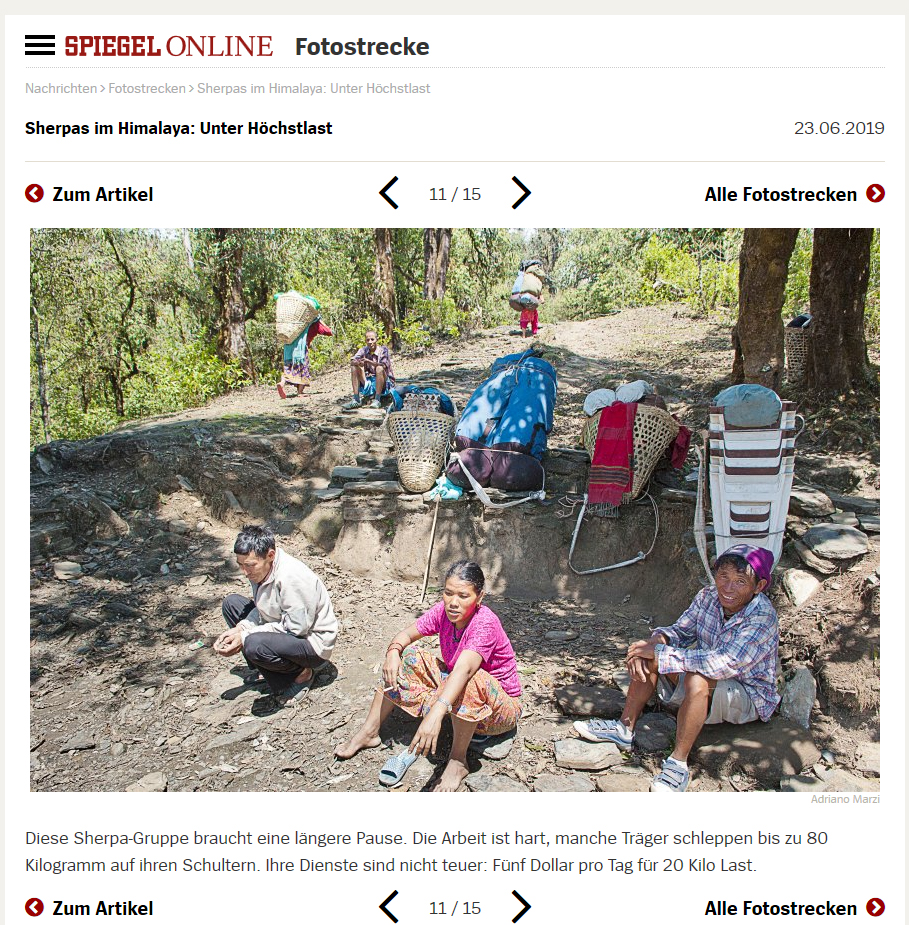 A group of porters having a rest along the Annapurna Sanctuary trek. Some porters can carry on their shoulders up to 80 kilos. The service they offer is so cheap – five dollars a day for 20 kilos load – that you can see them often working in Kathmandu streets too 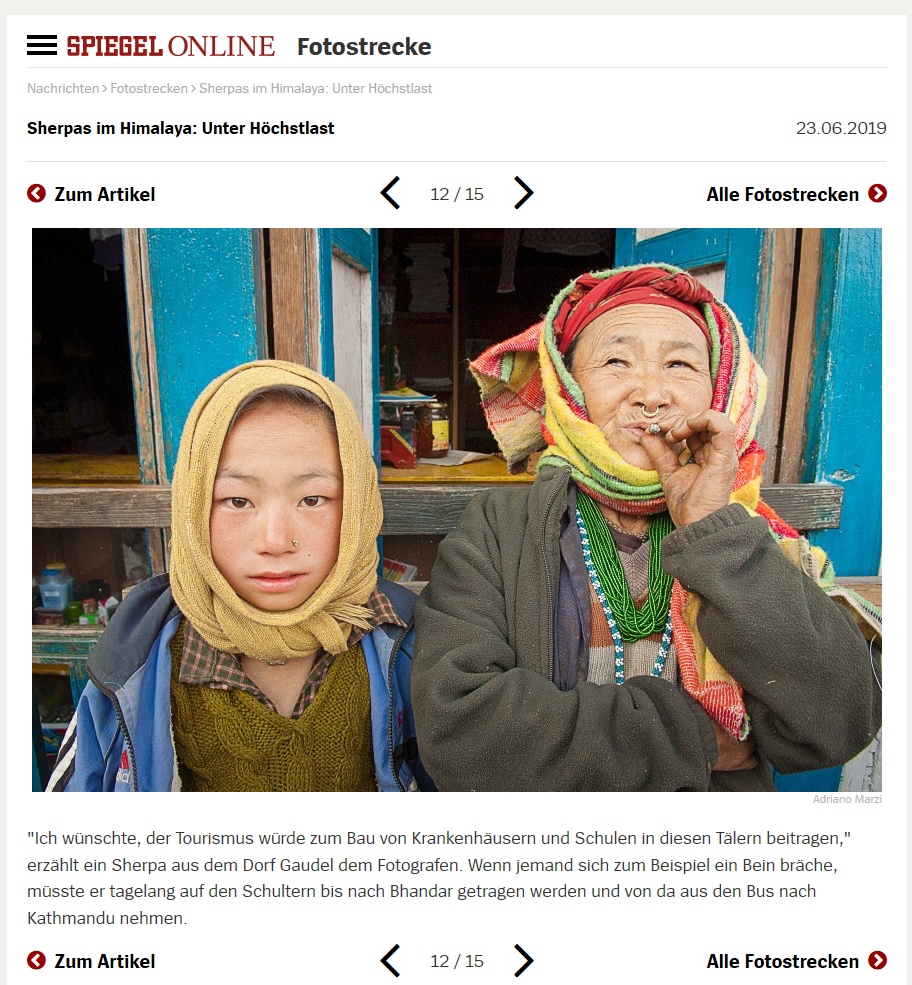 Sherpas in Gaudel village. “If someone fractures his leg here he must be carried on shoulders for days as far as Bhandar – tells me Kiru Kumar Rai, a porter from this village who worked on Mount Everest trekking routes many times – and then from there loaded on a bus bound to Khatmandu. I wish tourism may contribute to building hospitals and schools in these valleys” 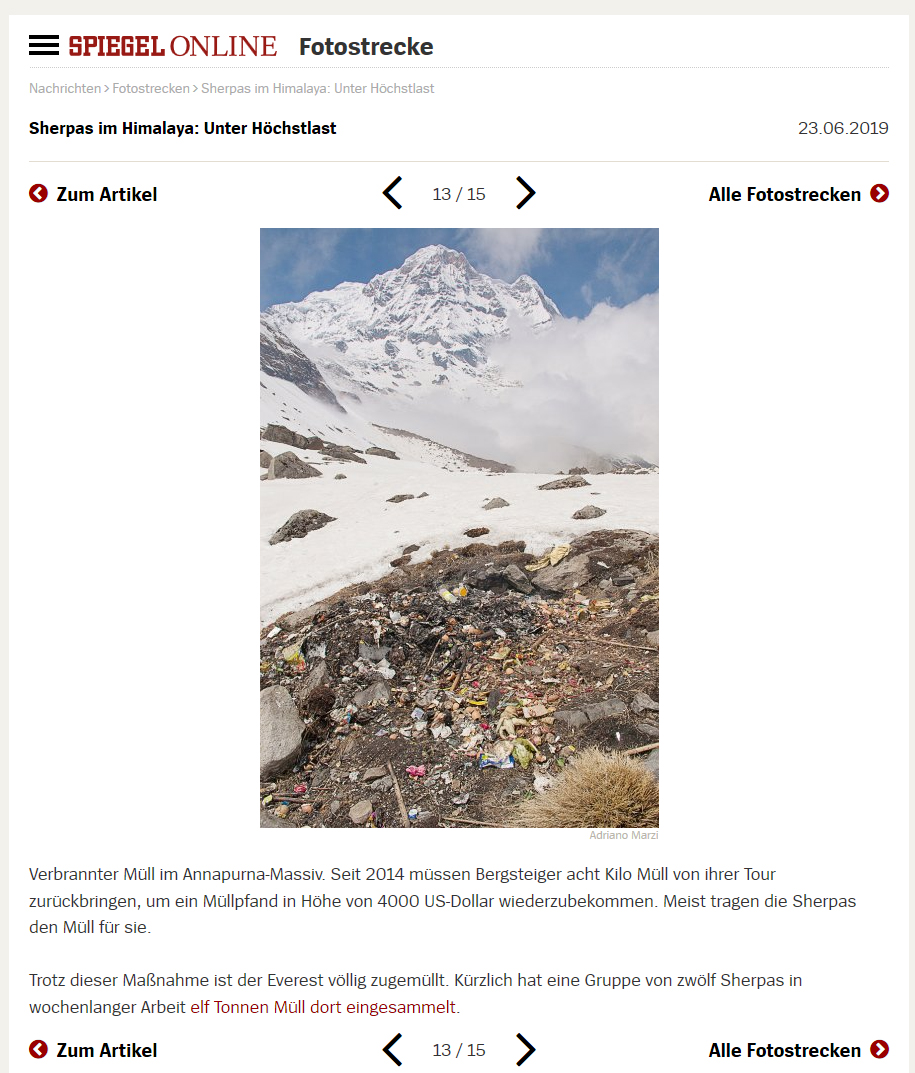 Waste burned on the Annapurna Sanctuary. Since 2014 Nepali government has established that every climber is to take down to valley 8 kilos garbage in order to get back the 4,000 dollar deposit they were requested to pay. However, this task is carried out by porters. On April 25 a team of 14 people was sent to Everest Base Camp with the mission to take back 11,000 tons garbage: 8 porters are expected to reach Camp 2 (at 6,400 meter altitude) and from there they will reach in smaller groups Camp 4 (7,950 m) where they will stay 15 days collecting garbage left behind by last years expeditions 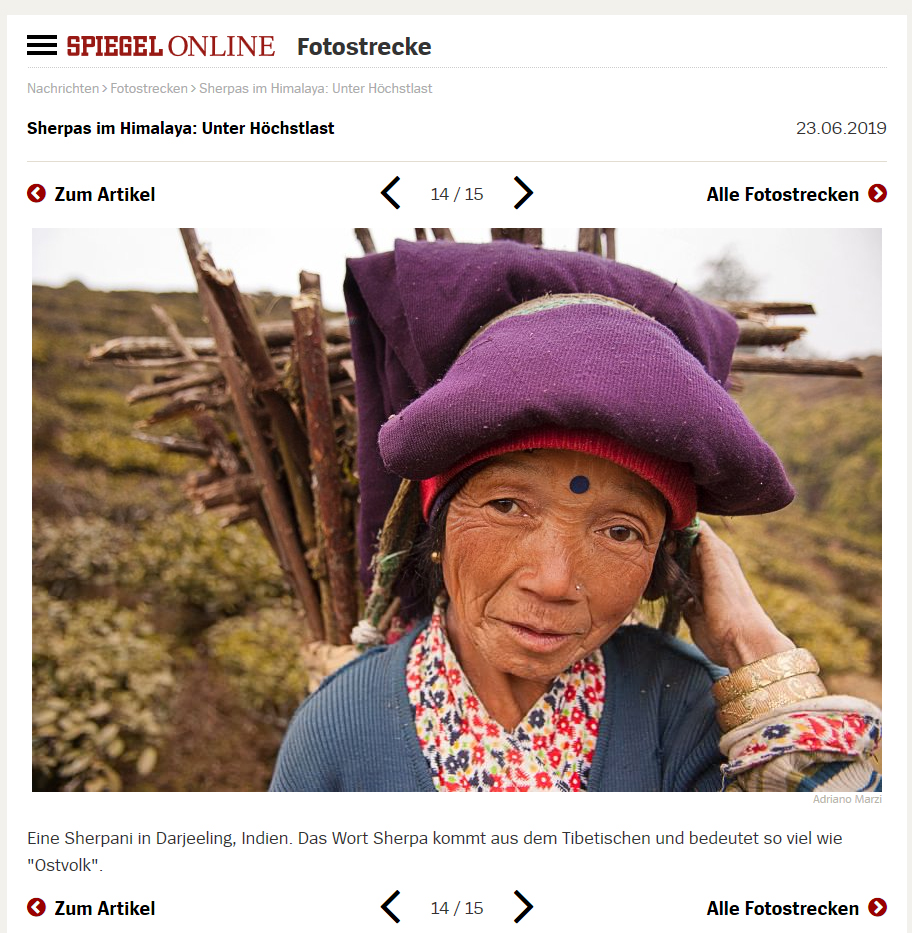 A sherpa on Darjeeling tea hills in India. Sherpas, the “Eastern people” – in the Tibetan language pa  means “people” and sher or shar means “East” – in the XV century started to settle in Nepal and India having left the Kham Tibet province and made it through Nang-pa La, an Himalaya pass at 5,716 meter altitude, to get away from Mongols. A migratory flow which had a second wave at the half of last century following Chinese occupation of Tibet 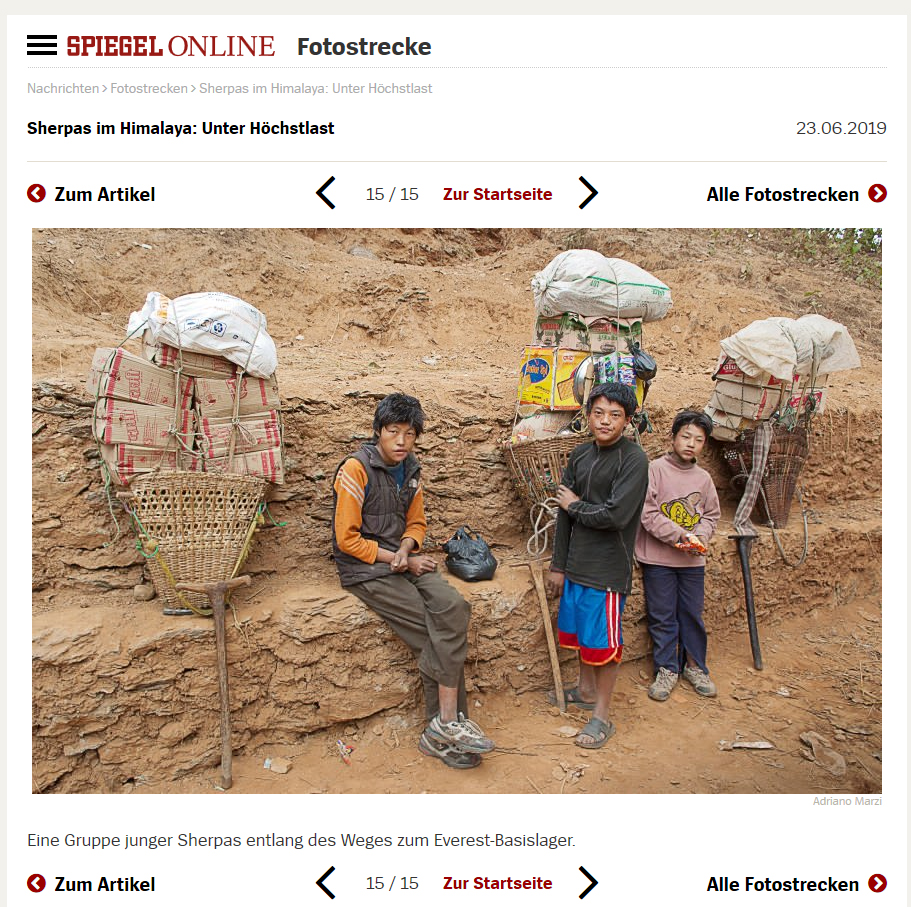 A group of young sherpas working along the Everest Base Camp trek. Today the name “Sherpa” is commonly used to refer to all the porters operating on Himalaya, even below 5,000 meters level. A job prevalent in a Country like Nepal which does not offer many opportunities even to educated people. Men, women and children paid according to the weight they are ready to carry. Often more than that even a mule would reject.